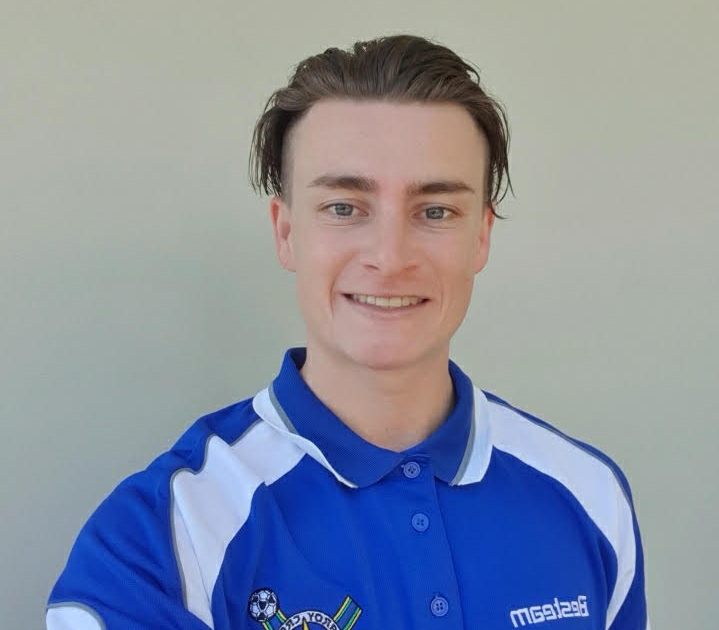 Liam our academy director has been with us since the late stages of 2019. Whilst on his C Licence course CC Strikers Director of Coaching Ross Brown scouted Liam and asked if he would be interested in taking an U18 1’s team at the club for the 2020 season. Liam was given a group of players who the previous year (U16 1’s) had finished in the lower half of the table in division 1.

The club and Liam agreed to push the boys into U18 1’s and set out with the expectation that it was going to be a tough year. With a squad of players who were all U17, hadn’t played together before and through a Covid affected year the boys managed to finish lower mid table and if results had gone their way may have finished higher.

After seeing what Liam did with the U18s the club approached Liam to put together a plan for an Academy. Liam pitched his idea of what the Academy should be and how it would all work.

Liam has been coaching for a combined 4 years. Although with coaching experience is 3-fold. Length of time is important but so his level of coaching and also volume of coaching. Liam began his coaching journey when he was 15 in order to help complete his Bronze and Silver Duke of Edinburgh Award. He coached for 2 seasons at Manly Allambie taking an U8 and then U9 team along with a parent coach as Liam was playing at the same time as the games

After this Liam took a break from coaching to focus on his HSC and after leaving school and bouncing around odd jobs landed on the idea of returning to coaching. Liam quickly started his own business and got to work obtaining some qualifications. Liam gained his

Liam then accepted a role at the North Shore Mariners that was a feeder to the Central Coast Mariners. Liam coached the U9 and U12 SAP Teams there as well as coaching U6s and 9s at Seaforth, U10s at Beacon Hill, U9s at Brookvale and most importantly U 18 1s at CC Strikers.

The following year Liam jumped on board as our academy director where he had 120 of our players across the 2021 season and beyond. Liam also coached and played in our AL 1s team. Outside of Strikers Liam also coached a U10s and U18 3’s Brookvale Teams, U9 and U12 Beacon Hill Teams and U11 Wakehurst team.

Liam has played for 17 years in total all of which as been in the MWFA across 3 clubs. Liam was a Manly Allambie Junior playing in a single team age group with players of mixed ability. Liam began training with Manly Allambie’s Men’s Premier League Team at the age of 14. This along with Coaching Director John Casey is what Liam credits his exponential rise over the next 2 years. Liam went from 14 3’s to 16 1’s. In the year the team was in 16 1’s Liam was placed on the bench for the Premier League reserves, won Junior Player of the Year and was scouted to go to trial for a college scholarship to the United States.

Liam breezed through the football and academic requirements for the Scholarship all that was left to do was decide. Liam gracefully declined the opportunity largely due to the fact that he would have had to leave before finishing his HSC.

After this Liam spent 1 more year at Manly Allambie before, in his own words “Going  on loan to Beacon Hill” as their was no longer an U18s Team at Allambie.

Liam then went back to Manly Allambie and was promoted in 2015 to Premier League along with the squad who went through the season undefeated in the league.

Over that summer Liam then made the Northern Beaches Breakers State league U20 team after rocking up to what he thought was a kick around with mates but ended up being a trial.

In 2016 Liam was unfortunately relegated back down to AL 1s with Manly Allambie where he continued to play for the next two seasons.

In 2021 Liam’s 2 paths in football met. The plan was for Liam and Ross to coach our CC Strikers AL 1 Squad but, with players numbers looking thin to say the least.  Liam ended up putting the boots back on and took on the challenging role of player/coach.